PDLC Film Busbar and its wiring 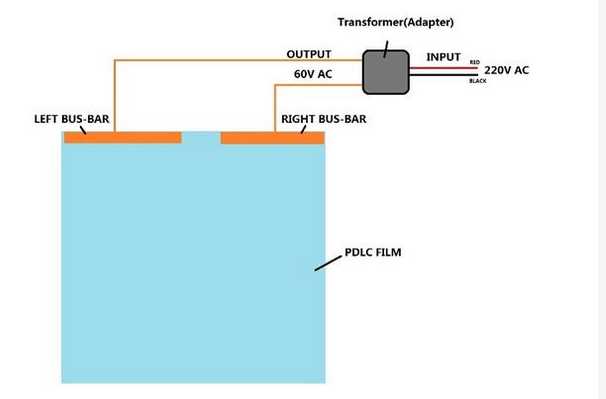 Busbar and its wiring

Broadly speaking, a busbar is an electrically conductive rod,bar,or strip.

In relation to switchable privacy glass,the busbar is a conductive copper strip applied to one or two edges of the sheet of PDLC Film prior to it being laminated between two panels of glass.

The copper strip acts as the conduit for the stepped-down(65V AC) electrical current which activates the liquid crystals within the film. The current is spread by means of a conductvie  induium Tin Oxide coating on the surface of the enclosing PET Film.

Some switchable glass require more than one Busbar t ensure full and even distribution of the electrical current.

Wires are soldered on to either end of each busbar. These wires are of opposing polarity coloured black and red. They are twin (or dual)wires. This apparent double-up is to

The busbar may be applied to the long or short edges,depending on your requirements.

Some panels, depending on their proportions,may require two busbars.

PDLC Busbar and wiring
About the author