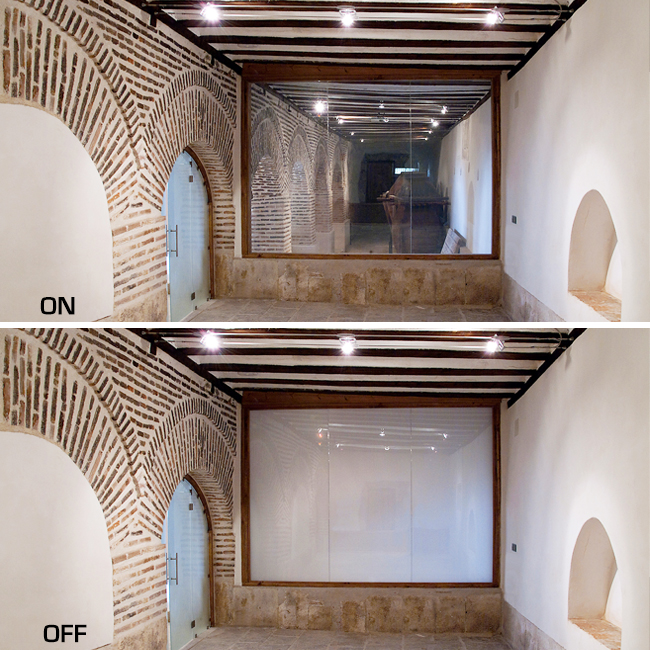 consists of micron sized droplets of liquid crystal dispersed in an optically isotropic polymer matrix. By choosing appropriate combinations of liquid crystal and polymer material, the PDLC film can be electrically switched from a light-scattering or opaque “off state” to a non-scattering or transparent “on state”. In the “off state”, the PDLC film appears milky white due to the refractive index mismatch encountered by incoming light at the liquid crystal/polymer interface.

Thus, in the “on state”, if the ordinary refractive index of the liquid crystal within the droplets is sufficiently close to the index of the polymer matrix material, the incoming light is no longer scattered and the PDLC film becomes clear. These films can be used for a wide variety of devices such as switchable windows. “Droplets of liquid crystal within a polymer matrix give rise to a strong light scattering; however electrical reorientation of the liquid crystal molecules provides a transparent state.” (Ref: Ridvan Karapinar, Department of Physics, Van – TURKEY.) To provide this electrical reorientation, the PET film which encloses the PDLC is coated with electrically conductive Indium Tin Oxide.

indium Tin Oxide (ITO) is a mixture of indium oxide and tin oxide. Being semi-conductive, it has a high electrical conductivity. Moreover, thin layers of about 200 nm are transparent in the area of visible light while infrared light is reflected. Indium tin oxide has a density of approximately 7 g/cm³ and is a white to yellowish colour. Indium tin oxide is an important transparent, electrically conductive material.