When the power is switched off the liquid crystal molecules are randomly oriented scattering light and the our switchable Smart Film becomes opaque (frosted, private).

When the small electrical supply is switched on, the liquid crystal molecules align and incident light passes through and the our switchable  Smart Film instantly clears (transparent). 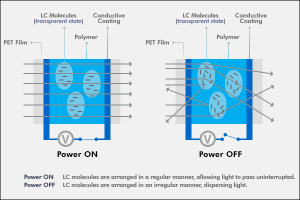 Smart Film Glass offers a Self Adhesive and a Non-Adhesive switchable privacy film that has the ability to contour to the curves of various types of glass. Smart Film is very popular for projection screens, electronic blinds, white boards, and high tech window treatments. Smart Film switchable privacy film provides maximum clarity when energized and extreme privacy when powered off. The only difference between the two switchable films is that Self Adhesive has a peel and stick backing and or non-adhesive can be installed with a double sided adhesive clear type.