PDLC Glass —-The secret that makes the partition wall special.

LIQUID CRYSTAL Switchable PDLC glass, electronically controlled curtains or smart glass have been developed for more than 20 years. Over the past 20 years, based on three patented technologies, this field has undergone three major revolutions: (1) the induced phase of the vector curve (NCAP), (2) polymer dispersed liquid crystal (PDLC), and (3) non-uniform polymer dispersed liquid crystal display (NPD-LCD). Its corresponding products also represent three generations. There is a common feature in these products – liquid crystal particles, so it can also be collectively referred to as liquid crystal particle displays, that is, LCMD, at the same time, there are also huge differences between these technologies and products.

Switchable PDLC Glass  is a new type of special photoelectric glass product that combines the PDLC Film into the middle of two layers of glass, and is formed in one piece after high temperature and high pressure gluing. People controls the transparent and opaque state of the glass by controlling the POWER on and off .Glass itself not only has all the characteristics of safety glass, but also has the privacy protection function of controlling whether the glass is transparent or not, due to the characteristics of the pdlc film interlayer, the switchable pdlc glass can also be used as a projection screen, instead of ordinary curtains, present high-definition picture images on the glass.

The biggest function of smart Switchable PDLC  glass is the privacy protection function, which can control the transparent and opaque state of the glass at any time.
2. Projection function: intelligent dimming glass is also a very good projection hard screen, in the light suitable environment, if you choose a high lumen projector, the projection imaging effect is very clear and outstanding. (It is recommended to use rear projection imaging)
3. It has the advantages of safety glass, including the safety performance of preventing debris from splashing after rupture, and good strike strength.
4. Environmental characteristics: The float and film in the middle of the switchable pdlc glass can insulate and block more than 99% of ultraviolet rays and more than 98% of infrared rays. Shielded part of the infrared light reduces thermal radiation and transmission. Shielding ultraviolet rays can protect the indoor furnishings from fading and aging due to ultraviolet radiation, and protect personnel from diseases caused by direct ultraviolet radiation.
5. Sound insulation : The Switchable pdlc film and film in the middle of the Switchable PDLC glass have a sound damping effect. Noise can be partially blocked. 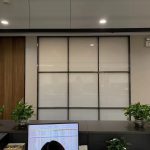 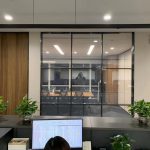 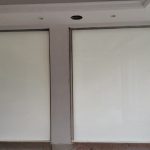 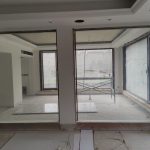 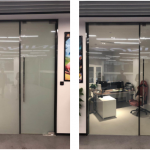 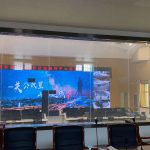 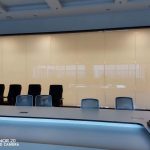 Switchable glass for Board office

Switchable glass for Board office

Switchable PDLC Film glass is totally customized product. Its price depends on glass type, glass thickness, glass structure and quantity, after receiving above information,then the final price can be checked out .

Once switchable glass film glass is finised, the glass can not re-cut,because it is tempered laminated glass. When cutting, the switchable pdlc film will go to break into Small particles.