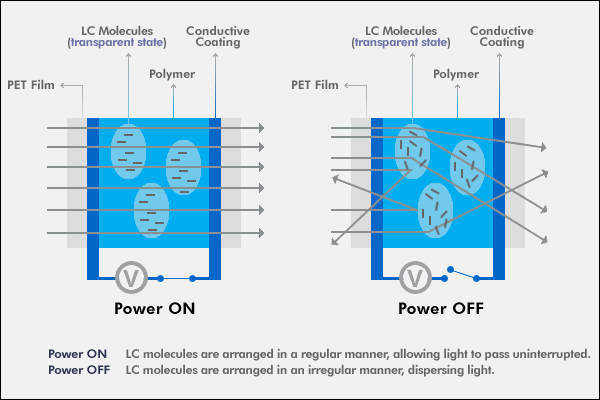 Laminated switchable glass is typically used for new construction projects or renovations where glass may be replaced. In this case, switchable film is sandwiched between two sheets of glass and two sheets of interlayer adhesive. Indium tin oxide (ITO) is a clear conductor that is coated on the inside of PET plastic films, which are sandwiched around the LC droplets encapsulated in a polymer matrix. PET/ITO films conduct the electrical current that causes the liquid crystals to align and thus render the glass transparent. Glass can be made to almost any thickness (5/16” to + for Insulated Units) and specification required (i.e. tempered, low-iron, etc.).

Self-adhesive switchable film is typically used for retrofit applications. Switchable adhesive film has an adhesive side that is dry applied to the surface of any smooth glass surface (similar to a smart phone screen protector) and can be easily installed in the field. The outer surface of the film is hard coated and scratch resistant. Copper mesh tabs on the top or sides connect the conductive layer to electrical wires soldered on by the installer, covered by a silicone bead, and attached to a power source. The electrical current can be controlled by a wall switch, home automation or smart phone app.